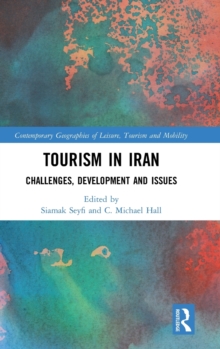 Part of the Contemporary Geographies of Leisure, Tourism and Mobility series

However, its negative image in many countries disguises its history of tourism and rich cultural and natural heritage.

Following the July 2015 nuclear deal and the reduction in sanctions, Iran is focusing on international tourism as a means to generate economic growth in addition to its substantial domestic tourism market.

Given the significance of tourism in the Middle East and in international politics, as well as restrictions on international mobility, this volume brings together the first contemporary collection of research on tourism in Iran.

Written by experts based both within and outside of Iran, the chapters engage with a number of crucial issues including the importance of religion, the role of women in society, sustaining Iran's cultural heritage, Iran's image and the resistive economy to provide a benchmark assessment of tourism and its potential future in a troubled political environment.

The book will undoubtedly be of interest not only to those readers who focus specifically on Iran but also those who seek a wider understanding of Iran's role in the region and how tourism is utilised as part of national and regional economic development policies.