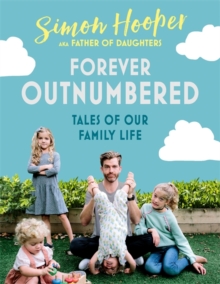 by Simon Hooper, Father of Daughters

'This is the story of my journey into parenthood, from being a 24 year old man-child with no idea of what being a dad involved, to where I find myself today: the single male representative in a household of five women, or in other words, outnumbered.

Our house is now known as "the place where silence came to die".

It's also where you'll find carpets that are made up of 50% glitter and where there are more pink stuffed animals than at a colour-blind taxidermy specialists.

But I wouldn't change a thing. These people are my life.'From uninitiated parents-to-be to those who know the ropes in families large or small, everyone will find something to relate to in Simon's hilarious and chaotic tales of his own home life.

His observations of being a father have delighted his hundreds of thousands of followers on Instagram: before now dads are often the forgotten ones who carry the luggage, open stiff jars, take photos on holiday, fix broken bikes, go back to work, do the night feeds and make a mean beans on toast with melted cheese without so much as a pat on the back.

All too often dads shrink into the background. But not in this book. Forever Outnumbered is an incredibly funny yet emotionally heartfelt ode to modern family life.