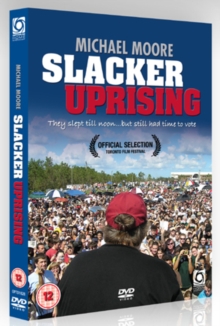 Documentary film-maker Michael Moore's attempt to galvanise student voter apathy in the run up to the 2004 US elections.

With special appearances from R.E.M., Roseanne Barr and Joan Baez, among others, Moore takes his message - vote against George W.

Bush - on a 60-city campus tour of the United States, promising attendees free underwear, a box of noodles, and an afternoon start!