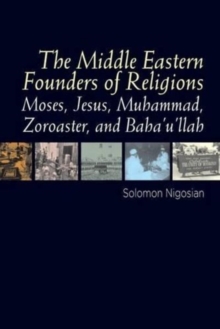 This book presents an academic introduction to the life and teachings of five Middle Eastern founders of religion -- five individuals whose systems of faith, thought, and action have won the allegiance of millions.

All believed to have experienced a personal encounter with the divine -- a "voice" directly from the "beyond" -- to proclaim Gods message to the community or people to which they belonged.

All attracted followers and opponents. Similarities in their religious outlook abound; but differences between the five pervade their approach toward society and culture, with issues of law, war, women, morality, ethics, the kingdom of God, life after death, and eternal judgment distinguishing their respective beliefs.

An Introduction provides an overview of the political history of the Middle East based on four periods (Early, Persian, Hellenistic, and Roman) and a brief description of the surviving religious traditions of the Middle East (including a proposal regarding the nature of so-called "selected" individuals). Five chapter texts separately address each religious founder from the viewpoint of readers from the Judaic and Christian traditions in terms of the religious world into which each individual appeared; the traditional account as presented by available sources or evidences; the reliability of the available sources or evidences for reconstructing their biographies; and a critical assessment of both the sources or evidences and the traditional account.

A concluding chapter compares the similarities and differences of the received divine messages, and notes that no new message has ever succeeded in shaking off entirely the influence of the faith from which it arose.

The work has been specifically designed for student adoption in Religious Studies.