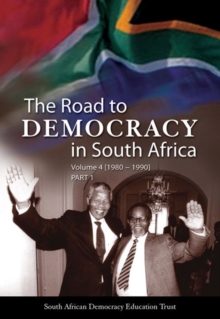 The road to democracy Hardback

Two enduring challenges in South African historiography are addressed by this group of committed scholars from SADET.

The Road to Democracy in South Africa: Volume 4 [1980-1990] firstly addresses the muted voices of largely unpublished black scholars, and secondly, ensures that the voices of the majority of our population are at the centre of the historic narrative. Comprising of 32 chapters, Volume 4 in the series focuses on the 1980s and `further fortifies the intellectual traditions set by the earlier volumes'.

Included in the volume are chapters by Bernard Magubane on the apartheid state; Sifiso Ndlovu on the ANC and negotiations; Bhekizizwe Peterson on the arts; Zine Magubane on women's struggles; Gregory Houston on the ANC's underground and armed struggle; Thami ka Plaatjie on the PAC; Mbulelo Mzamane and Brown Maaba on the BCM and AZAPO; Eddy Maloka on the SACP; Christopher Saunders on the above-the-ground struggles conducted by white activists; and Jabulani Sithole on the trade union movement.