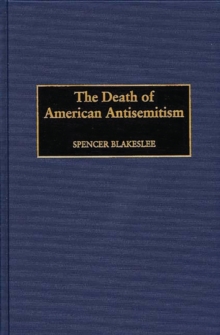 The Death of American Antisemitism Hardback

Blakeslee examines the history and current status of Jews and antisemitism in the United States to reveal what we know of antisemitism and the ways in which this knowledge is seriously flawed.

He explores the significant historical role antisemitism played in the formation of Jewish advocacy organizations and the subsequent success they enjoyed over several decades of publicly combating antisemitism.

He then examines three specific incidents in the 1990s and the ways the advocacy organizations responded. Antisemitic attitudes and incidents in the United States have dropped steadily since the post World War II revelations about the Holocaust.

While antisemitism has not disappeared entirely from the American scene, it has dwindled to the point where the Anti-Defamation League considers the average American not antisemitic.

Blakeslee probes why, if this statement is accurate-and prevailing statistics suggest it is-prominent Jewish advocacy organizations continue to lavish so much attention and money on an issue of little actual significance.

A provocative study for all sociologists, researchers, and concerned lay people involved with the heated debate over antisemitism, Jewish identity, assimilation, Black-Jewish relations, and organizational studies.