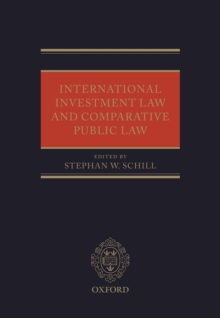 In-depth conceptualization is however often lacking.

The current study is the first, pioneering effort to bring these under-developed ad hoc references tocomparative and international administrative law concepts into a deeper theoretic and systematic framework. The book thus intends to develop a 'bridge' between treaty-based international investment arbitration and comparative administrative law on both a theoretical and practical level.

The major obligations in investment treaties (indirect expropriation, fair and equitable treatment, national treatment, umbrella/sanctity of contract clause) and major procedural principles will be compared with their counterpart in comparative public law, both on the domestic as well as international level.

That'bridge' will allow international investment law to benefit from the comparative public law experience, which could enhance its legitimacy, its political acceptance, and its ability to develop more finely-tuned interpretations of central treaty obligations.