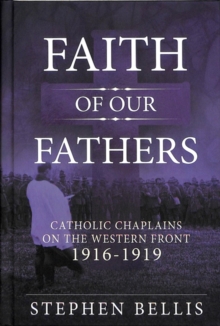 Faith of Our Fathers : Catholic Chaplains with the British Army on the Western Front 1916-19 Hardback

Accompanying the fighting soldiers in Picardy, Flanders, and Artois, these diarist-chaplains daily recorded their first-hand experiences; telling us much about life at the Front, the nature of war, the Catholic Church in action, the post-Armistice civil state of affairs.

Daily accounts are punctuated by the deaths of colleagues, often a short distance away, and in this manner creating surreal situations in the same time frame and location by simple comparison.

A range of emotions and incidents expose the absurdity, yet profundity, of war from the unlikely source of clergymen: from being arrested as a spy, to attending a soldier to be shot at dawn, from being allegedly drunk on duty, to a cover up of an officer's suicide.

Chaplains as men are assessed from those who left primary and authenticated evidence, thereby minimalising the dangers of post-war sentimentalism or triumphalism, thus avoiding those studies which concentrate on the famous and ignore 'ordinary' chaplains who had become anonymous. Drawing from Catholic chaplaincy evidence at large, historical and geographical contexts are accompanied by real day-to-day experiences.

Paintings by a Catholic chaplain at the front add to the milieu.

The diarist's encounters provide much of the data as they served on the Somme in 1916, then Ypres and Arras in 1917.

These tests of physical and mental endurance were nothing to compare with 1918, and particularly the German Spring Offensive.

Each day of the assault will show the fear, desperation and panic of not only the military, but also the civilian population. The Catholic Church at war was uniquely universal; this meant that soldiers from all countries including Germany were catered for, as were French and Belgian civilians, and anybody who sought Catholic services.

A universal Church requires a broad social composition, accordingly and fortunately, both diarists occupied opposite ends of the Catholic social spectrum.

Their personalities were diverse and colourful and together ought to dovetail with their counterparts in the British Army from soldier to officer.

But given the prevailing contemporary climate where sectarianism and secularism, class snobbery and racism, were deeply embedded, would accommodation for both sides be possible?

This raises the fundamental question within Catholic circles: was it possible to balance the responsibilities and duties of a priest in khaki with an officer in the British Army, and if so to what degree?

Were they 'True to Thee Till Death'? Fr Gill sets the tone for a chaplain's life: 'Not the kind of life to select as an amusement - but there will be plenty to do'. This study uniquely reveals the roles and dilemmas of Catholic chaplains after the Armistice to demobilisation.

Despite the Armistice of November 11th the Army did not melt away.

Clearing up operations and potential military dangers needed to be addressed before the conclusion of war on June 28th 1919.

Gillett and Steuart provide insights of this period.

The former in France, witnessed the civil efforts of reconstruction and the British Army's own role, whilst enjoying French joie de vivre and religious culture but always empathising with 'ordinary folk'.

The latter in Germany, prepared for military intervention in the eventuality of non-compliance to treaty terms and contented himself with the officer class, mess duties, and high culture.

Their contrasting personalities are striking, their spiritual consistency remarkable, defining their missions as successful within the Catholic project.