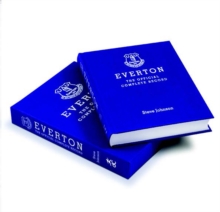 Everton: The Official Complete Record is the definitive account of one of Europe's most distinguished clubs.

Nearly 140 years after Everton's humble birth as a church team, Steve Johnson has painstakingly trawled through the archives to provide for details of every game, line up, goal scorer, attendance and result, as well a plethora of other facts and figures.

This officially endorsed record of one of English football's great names includes season by season accounts of every campaign since the onset of league football, more than 100 player profiles and a foreword by Phil Jagielka.