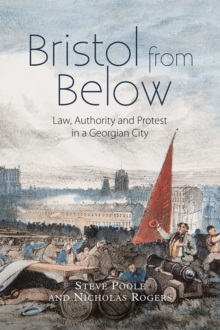 Bristol from Below : Law, Authority and Protest in a Georgian City 28 Hardback

Bristol from Below captures the substance and scale of popular politics and protest in Bristol over the course of the long eighteenth century.

It charts the lives of ordinary Bristolians in the making of their city and devotes particular attention to their relationship with the mercantile elites who dominated the city's governing institutions.

While not ignoring the contribution of the middling sort to the cultural and political life of the city, the book focusses upon the interaction between authority and plebeian sentiment as a way of analysing the complexities of popular interventions in politics and society.

It casts new light on the social dynamics of Bristol's 'golden age' and how it is remembered in today's city.

It also addresses the general themes of class, authority, custom and law that have long engaged eighteenth-century historians.

Bristol From Below will have a broad appeal to scholars and students of eighteenth-century social, economic and political history as well as to urban and regional historians and to those interested in the time when Bristol was England's 'Second City'. STEVE POOLE is Professor of History and Heritage at the University of the West of England, Bristol. NICHOLAS ROGERS is Distinguished Research Professor in History at York University, Toronto.