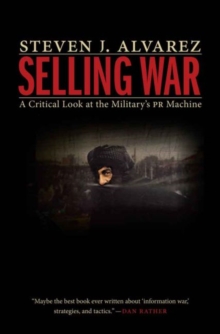 In the spring of 2004, army reservist and public affairs officer Steven J.

Alvarez waited to be called up as the U.S. military stormed Baghdad and deposed Saddam Hussein.

But soon after President Bush's famous PR stunt in which an aircraft carrier displayed the banner "Mission Accomplished," the dynamics of the war shifted.

Selling War recounts how the U.S. military lost the information war in Iraq by engaging the wrong audiences, that is, the Western media, ignoring Iraqi citizens and the wider Arab population, and playing mere lip service to the directive: "put an Iraqi face on everything." In the absence of effective communication from the U.S. military, the information void was swiftly filled by Al Qaeda and, eventually, ISIS.

As a result, efforts to create and maintain a successful, stable country were complicated and eventually frustrated. Steven J. Alvarez couples his experiences as a public affairs officer in Iraq with extensive research on communication and government relations to expose why communications failed and led to the breakdown on the ground.

A revealing glimpse into the inner workings of the military's PR machine, where personnel become stewards of presidential legacies and keepers of flawed policies, Selling War provides a critical review of the outdated communication strategies executed in Iraq.

Alvarez's candid account demonstrates how a fundamental lack of understanding about how to wage an information war has led to the conditions we face now: the rise of ISIS and the return of U.S. forces to Iraq.