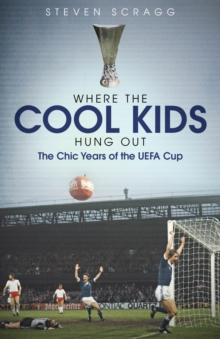 Where the Cool Kids Hung out : The Chic Years of the UEFA Cup Hardback

Where the Cool Kids Hung Out is the story of the UEFA Cup's glory years, when it was a tournament that boasted a stronger field of teams than its senior siblings, the European Cup and the European Cup Winners' Cup.

Since then it has drifted into its poor current form as the Europa League, the Champions League having siphoned off most of Europe's biggest clubs.

Yet the UEFA Cup enjoyed some very stylish years, no more so than during the two-legged final period.

It was an era when Ipswich Town swept to glory, Liverpool conditioned themselves to conquer the continent, Tottenham Hotspur twice captured the cup and Dundee United came agonisingly close.

It was also a time when Borussia Monchengladbach made their name, Real Madrid regenerated as a force and Serie A came to dominate.

Drawing on an encyclopaedic knowledge of the tournament plus interviews with players, journalists and fans who lived and loved the competition, Steven Scragg brings you the definitive account of the UEFA Cup's halcyon days.