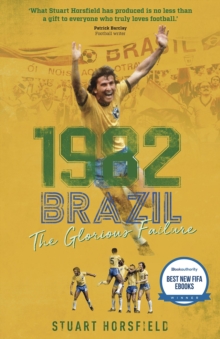 1982 tells the story of football's most exhilarating and entertaining World Cup side.

This scintillating Brazil team - blessed with Zico, Socrates, Falcao, Eder and Junior - lit up the 1982 World Cup with a brand of football that was 'futebol arte'.

Playing to the accompaniment of a samba soundtrack from their supporters in the stands, the side scored 15 goals in five games and enchanted the world, but their dream fell apart in the Sarria Stadium against Italy.

Even so, it was a match considered one of the greatest World Cup fixtures of all time and it changed the way the game was played forever.The Brazilian 1982 World Cup side have become a cast of mythical characters.

Despite failing to reach the semi-finals, they made the football world hold its breath every time they stepped on the pitch.

Told through the eyes of a young boy who fell in love with the men in yellow, and the memories of those who were there to witness Brazil's most glorious failure, 1982 is the definitive account of the greatest team never to win a World Cup.