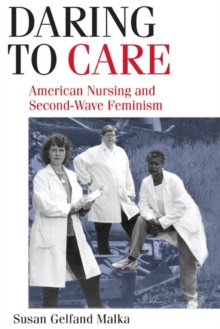 Daring to Care examines the impact of second-wave feminism on the nursing field since the 1960s.

The first extended from the mid-1960s to the mid-1980s, when feminism seemed to belittle the occupation in its analysis of gender subordination but also fueled nursing leaders' drive for greater authority and independence.

The second era began in the mid-1980s, when feminism grounded in the ethics of care appealed to a much broader group of caregivers and was incorporated into nursing education.

While nurses accepted aspects of feminism, they did not necessarily identify as feminists; nonetheless, they used, passed on, and developed feminist ideas, which is evident in nursing school curricula changes and the increase in self-directed and specialized roles available to twenty-first-century expert caregivers.