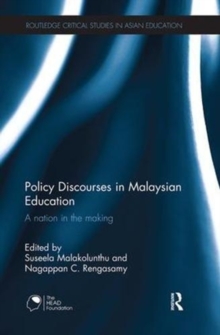 Policy Discourses in Malaysian Education : A nation in the making Paperback / softback

Since independence in 1957, Malaysia has become a globally-recognised industrial trading partner.

With a 60% Muslim population, it also enjoys the reputation of being a moderate and peaceful nation.

However, with just a short time left to realising its Vision 2020 of developed nationhood, the pathway of nation building still seems ambiguous.

There is a brewing tension in its race and ethnic relations which has permeated the various fronts, namely politics, society, economics and education.

This book analyses the education policies that have been formulated and implemented in Malaysia since independence.

It demonstrates how these policy enactments have influenced the nation's growth and transformation, and the challenges faced in creating a model of equity and multicultural co-existence among its racially and ethnically diversified people.

Shedding light on these issues, it points towards the major mending that is needed for Malaysia to become a truly developed nation. Chapters include:Education of ethnic minorities in Malaysia: Contesting issues in a multiethnic societyAccess and equity issues in Malaysian higher educationGraduate employability in government discourse: A critical perspectiveThis comprehensive book is a case study on Malaysia that will supplement researchers and advance students in their understanding of a multi-racial society's perspective and attitude towards education.