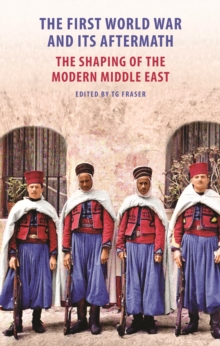 Think of a map of World War I and chances are that map will be of Europe-but the First World War had just as heavy an impact on the Middle East, shaping the region into what we know it as today.

This book gathers together leading scholars in the field to examine this impact, which is crucial to understanding the region's current problems and the rise of groups like the Islamic State. In addition to recounting the crucial international politics that drew fierce lines in the sands of the Middle East-a story of intrigue between the British, Russians, Ottomans, North Africans, Americans, and others-the contributors engage topics ranging from the war's effects on women, the experience of the Kurds, sectarianism, the evolution of Islamism, and the importance of prominent intellectuals like Ziya GA kalp and Michel 'Aflaq.

They examine the dissolution of the Ottoman empire, the exploitation of notions of Islamic unity and pan-Arabism, the influences of Woodrow Wilson and American ideals on Middle East leaders, and likewise the influence of Vladimir Lenin's vision of a communist utopia.Altogether, they tell a story of promises made and promises broken, of the struggle between self-determination and international recognition, of centuries-old empires laying in ruin, and of the political poker of the twentieth century that carved up the region, separating communities into the artificial states we know today.