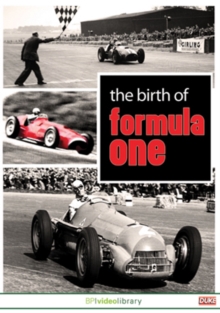 The Birth of Formula One DVD

Documentary about the beginning of Formula One racing, starting with the Grand Prix at Silverstone on 13th May 1950.

The film contains archive footage of races from 1951 at Reims, Silverstone and the Nurburgring.

The German Grands Prix of 1953 and 1954 also feature where Stirling Moss and Mike Hawthorn, among others, compete around the tracks.