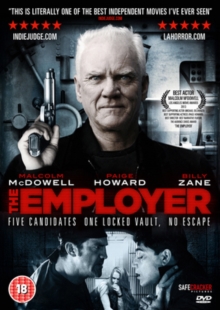 Malcolm McDowell stars in the title role of this thriller written, directed and produced by Frank Merle.

When five applicants get called in for an interview at the Carcharias Corporation, they all enter the game on a level playing field.

However, after the first round of interviews, all five people wake up in a locked vault with no visible way out.

As the head of the company known only as The Employer informs them that there is only one position to fill, the five seemingly average people take on the mindset of kill or be killed.