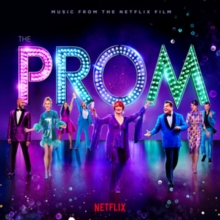 'The Prom (Music From the Netflix Film)' is an album of music from the Netflix film directed by Ryan Murphy and based on the hit Broadway musical from Bob Martin, Chad Beguelin, and Matthew Sklar. The album includes all sixteen songs from the original musical written by Matthew Sklar and with lyrics by Chad Beguelin, each recorded by the film's star-studded cast including Meryl Streep, James Corden, Nicole Kidman, Kerry Washington, Andrew Rannells, Keegan-Michael Key, Ariana DeBose and newcomer Jo Ellen Pellman.