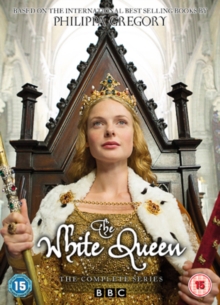 The complete series of the BBC drama based on the historical novels by Philippa Gregory.

Set during the Wars of the Roses, a dynastic struggle for power that dominated the latter part of the 15th century and threatened to tear England apart, the series follows the fortunes of three women who are determined to have their say in the politics of their age, Elizabeth Woodville (Rebecca Ferguson), Margaret Beaufort (Amanda Hale) and Anne Neville (Faye Marsay).

With even King Edward IV (Max Irons) and his manipulative advisor Lord Warwick (James Frain) subject to the ploys of the women, who will prevail in the struggle for power?