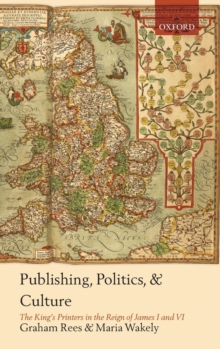 Publishing, Politics, and Culture : The King's Printers in the Reign of James I and VI Hardback

Based on hitherto unexplored and unpublished legal and business records, this study presents the fullest account so far published of any London printing firm in the reign of James I.

In particular it examines the businesses of men associated with that crucial instrument of cultural production-the King's Printing House.

This institution stood four-square at the top of the London printing and publishing trade, for it monopolized the right to print the Bible, Book ofCommon Prayer, and other indispensable works promoted or encouraged by the king.

The office of King's Printer, initially owned by Robert Barker, was potentially very lucrative, and so attracted the predatory attentions of the prosperous book-trade partnership of John and Bonham Norton, and John Bill. The stage was set for bitter rivalry between Barker and his opponents, rivalry which involved sharp practice, deceit, bullying, and downright thuggery-with lawsuits to match.

Barker was no fool yet he was up against very able, resourceful individuals who understood better than Barker that they were in business to promote the king's politico-cultural programme, and extend his influence at home and abroad.

That is exactly what John Norton and John Bill did, and to such good effect and with hisunique experience of the domestic and continental book trade, Bill eventually became the greatest London book trader, printer, publisher, disseminator of ideas, and cultural entrepreneur of his generation.