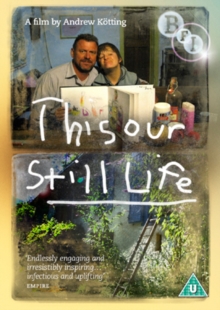 This Our Still Life DVD

The footage follows Eden, who was born with the rare genetic disorder Joubert Syndrome, as she enjoys life in the family's Pyrenean farmhouse undertaking activities such as painting and singing.

The film is accompanied by the black and white short 'Hoi-Polloi' (1990), an early movie from Kötting which features his friends and family, including Eden as a baby, while portraying life in the French Pyrenees.