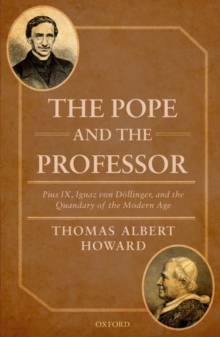 The Pope and the Professor : Pius IX, Ignaz von Doellinger, and the Quandary of the Modern Age Hardback

The Pope and the Professor tells the captivating story of the German Catholic theologian and historian Ignaz von Doellinger (1799-1890), who fiercely opposed the teaching of Papal Infallibility at the time of the First Vatican Council (1869-70), convened by Pope Pius IX (r. 1846-1878), among the most controversial popes in the history of the papacy.

Doellinger's thought, his opposition to the Council, his high-profile excommunication in 1871, and theinternational sensation that this action caused offer a fascinating window into the intellectual and religious history of the nineteenth century.

Setagainst the backdrop of Italian and German national unification, and the rise of anticlericalism and ultramontanism after the French Revolution, The Pope and the Professor is at once an endeavor of historical and theological inquiry.

It provides nuanced historical contextualization of the events, topics, and personalities, while also raising abiding questions about the often fraught relationship between individual conscience and scholarly credentials, onthe one hand, and church authority and tradition, on the other.