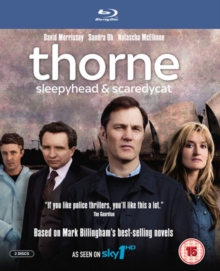 Double bill of crime thrillers based on the novels by Mark Billingham.

In 'Sleepyhead', Thorne finds himself confronting his own demons as he races against time to track down the mysterious serial killer who has mounted a series of unusual attacks on young women.

In 'Scaredy Cat', Thorne is brought in to investigate the case of a killer who picked out his victim at Euston station and followed her home on the tube before strangling her to death in front of her child.

At the same time a second body, murdered in the same way, is discovered behind King's Cross station.

This grisly coincidence echoes the recent killings of two other women who were stabbed to death on the same day.

Could it be that this is not the work of one serial killer, but two?