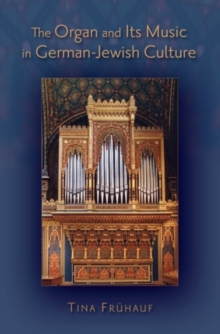 The Organ and its Music in German-Jewish Culture Hardback

The Organ and Its Music in German-Jewish Culture examines the powerful but often overlooked presence of the organ in synagogue music and the musical life of German-speaking Jewish communities.

Tina Fruhauf expertly chronicles the history of the organ in Jewish culture from the earliest references in the Talmud through the 19th century, when it had established a firm and lasting presence in Jewish sacred and secular spaces in central Europe.

Fruhauf demonstrates how the introduction of the organ into German synagogues was part of the significant changes which took place in Judaism after the Enlightenment, and posits the organ as a symbol of the division of the Jewish community into Orthodox and Reform congregations. Newly composed organ music for Jewish liturgyafter this division became part of a cross-cultural music tradition in 19th and 20th century Germany, when a specific style of organ music developed which combined elements of Western and Jewish cultures.

Concluding with a discussion of the organ in Jewish communities in Israel and the USA, the book presents in-depth case studies which illustrate how the organ has been utilized in the musical life of specific Jewish communities in the 20th century. |L Based on extensive research in the archivesof organ builders and Jewish musicians, The Organ and Its Music in German-Jewish Culture offers comprehensive and detailed descriptions of specific organs as well as fascinating portraits of Jewish organists and composers. With an extensive companion website featuring full color illustrations andover 200 organ dispositions, this book will be eagerly read by performers, students, and scholars of the organ, as well as students and scholars in historical musicology and Jewish music.