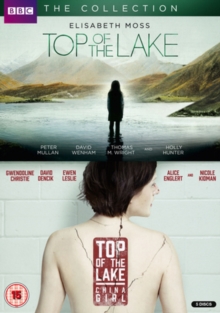 Top of the Lake: The Collection DVD

All 12 episodes of Jane Campion's darkly gritty crime series starring Elisabeth Moss as Detective Robin Griffin. 'Top of the Lake' follows Griffin as she investigates the disappearance of a young girl in the remote New Zealand township of Lakeside, where she used to live.

When 12-year-old Tui (Jacqueline Joe), the daughter of vicious local drug lord Matt Mitcham (Peter Mullan), is found to be pregnant, her unwillingness to name the father is followed by her sudden disappearance.

Whilst visiting her dying mother (Robyn Nevin), Sydney-based detective Robin finds herself drawn into the case, but as her investigations reveal more about the dysfunctional community she once fled, she uncovers a simmering, underlying brutality, with the menacing presence of Mitcham at its core.

The episodes are: 'Paradise Sold', 'Searchers Search', 'The Edge of the Universe', 'A Rainbow Above Us', 'The Dark Creator' and 'No Goodbyes Thanks'.

In 'Top of the Lake: China Girl', set four years later, Robin searches for a new start and heads to Australia to begin a new job.

Still struggling with residual PTSD, she is quickly thrust into her first case when the body of an unknown Asian girl washes up on Bondi Beach.

As Robin and her new partner Miranda Hilmarson (Gwendoline Christie) begin their investigations, Robin tries to get back in contact with her 17-year-old daughter Mary (Alice Englert), whom she gave up for adoption.