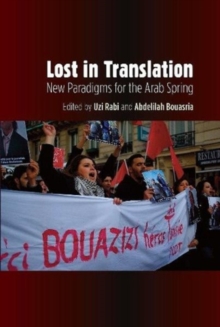 Lost in Translation : New Paradigms for the Arab Spring Hardback

These events, collectively referred to as the Arab Spring, spread contagiously throughout the Middle East and the Maghreb.

But instead of ushering in tidy transitions of power in autocratic regimes, the revolutions and uprisings ushered in a state of chaos, which greatly complicates the task of analysts and historians whose job it is to make sense of what has taken place.

Will the Arab Spring bring much needed change that benefits the Arab peoples or will instability and turmoil keep the Middle East in a perpetual state of what some have termed the Arab winter? This is a contributory work by Middle East experts.

As well as political and social analysis of the events and aftermath of the Arab Spring, the work provides a complex of paradigms (ranging from complexity studies to sport) which have thus far been overlooked by scholars and commentators in their assessments of Arab Spring manifestations.

The result is unprecedented insights into the myriad forces that have inhibited genuine political and social transformations in the states of the Middle East and North Africa.