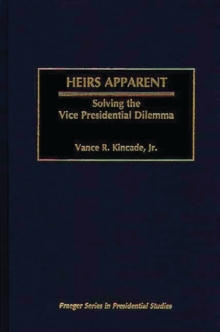 The vice presidency is the second highest office to which an American can be elected.

This office should be an ideal place to launch a campaign to capture the presidency, yet only two incumbent vice presidents have thus far been able to win the ultimate prize.

Vance Kincade analyzes this dilemma and offers some answers to why vice presidents have difficulties gaining credibility to pursue the presidency and why Vice Presidents John C.

Breckinridge, Richard Nixon, and Hubert Humphrey each failed in their campaigns for the presidency. Kincade's primary focus is on the two vice presidents who ascended to the presidency, Martin Van Buren and George Bush.

He explores how these two were able to avoid the dilemma that baffled the others.

Was it something in their backgrounds that brought success?

Was it serving as vice president under Andrew Jackson and Ronald Reagan that helped turn the trick?

Could their successes be seen as fulfilling an historical cycle that found Van Buren and Bush in the right place at the right time? In the last section of this intriguing study, Kincade uses political science models to explain their victories and offers a guide to future vice presidents who attempt to join the exclusive club of vice presidents to reach the presidency.

Scholars, students, and the general public interested in American political history and the presidency will find this study of particular value.