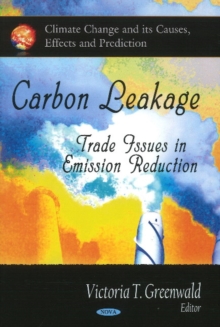 As the debate on reducing greenhouse gases (GHGs) has progressed, increasing concern has been raised about how a U.S. reduction program would interact with programs in other countries.

In a global context where currently some countries have legally binding policies to reduce greenhouse gas emission and other countries do not, the potential exists that countries imposing carbon control policies will find themselves at a competitive disadvantage vis-a-vis countries without comparable policies.

The risks accompanying establishment of carbon control policies, in the absence of similar policies among competing nations, have been central to debates on whether the U.S. should enact greenhouse gas legislation. This book examines international climate change policy, the potential environmental and economic effects and an analysis of issues raised by the proposed mitigating approaches and options.