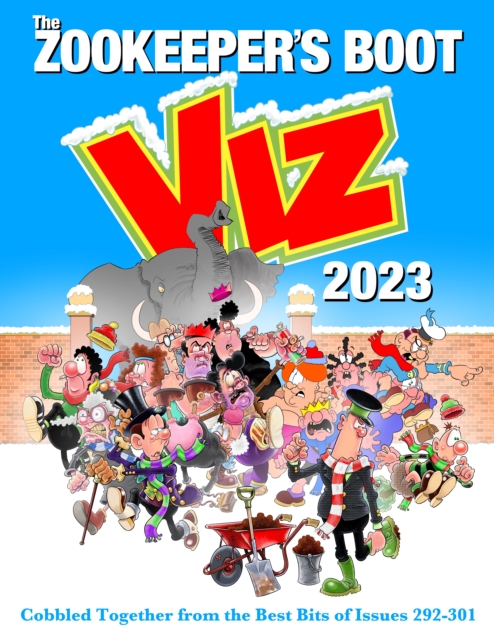 The Viz Annual 2023: Zookeeper's Boot: Cobbled Together from the Best Bits of Issues 292-301 Hardback

This last year has been one of great turmoil as wars, epidemics and extreme climate events have ravaged the globe.

Sometimes it has felt as if the old certainties that have shored up our worldview for so long are being swept away in an unstoppable torrent of disaster, chaos, and disarray. But one thing has stolidly and steadfastly resisted the foaming tides of time: Viz.

No matter what cataclysms and catastrophes lay waste to our fragile planet, the potty-mouthed comic's loyal readers know they can expect an annual packed full of stuff about toilets, second-rate celebrities and unfeasibly large testicles to take their mind off oncoming Armageddon. And this year - as Viz's latest annual The Zookeeper's Boot goes on sale - is no exception to that rule. A stout and glossy 226-page hardback, The Zookeeper's Boot is stuffed with the hilarious stuff that has made Viz the country's fourth* or fifth** favourite humorous magazine (* ** possibly sixth) for well over four decades... *Edge-of-seat Adventures: Jack Black to the Future, The Titanic Mystery, The Death of Nelson and Bad Bob the Randy Wonderdog*Cartoons: The Fat Slags, Sid the Sexist, Biffa Bacon, Mrs Brady Old Lady, Johnny Fartpants, The Real Ale Twats and Roger Mellie*Readers' letters and Top Tips, spoof ads, quizzes, games, Roger's Profanisaurus and much moreSo this Christmas, let The Zookeeper's Boot tread its muck across your festive threshold (and those of all your friends, relatives and acquaintances), spreading its merry bouquet wherever it goes.