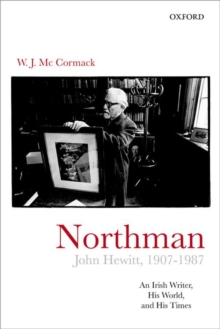 This, the first ever biography of John Hewitt, is based on archival material, both personal and literary.

In many ways it is also a biography of his wife, Roberta (nee Black), whose manuscript journal is also in the public domain.

To establish Hewitt's late arrival as a poet, the book opens with a chapter recounting his negotiations with a London publisher over a long period and the eventual appearance of No Rebel Word (1949).

Successive chapters trace hiseducation, courtship, literary apprenticeship, first employment as a junior gallery curator in Belfast, the political conflicts of the 1930s and then the War Years, his rejection for the post of director in Belfast's Civic Museum and Gallery, and his utopian commitment to regionalism.

Appointment to theHerbert Gallery in Coventry in 1956 brought recognition and confidence.

His leanings towards socialist realism came to accommodate abstract art, and he defended the sculptor Barbara Hepworth against the penny-pinching ratepayers.

Throughout this two-part career, Hewitt maintained his output as poet, culminating in the Collected Poems (1968).

His Irish political commitments never wavered, though he became cautious about forms of nationalism which proclaimed themselves left-wing.

RobertaHewitt's work for the Coventry Labour Party provided an outlet for her energies and her domestic frustrations.

Throughout these forty years, the poetry is kept constantly in view, sometime by reference to individual pieces and their origins, and some by means of longer 'breaks for text' where more detailedcriticism is practised. In 1972, the Hewitts returned to Belfast whenthe Troubles reached an ugly peak.

Committed to anti-sectarianism, Hewitt withheld support from all parties, though he took an interest in trade union activity.

Publishing (perhaps too much) poetry in his last decade-and-a-half, he died very much in harness.