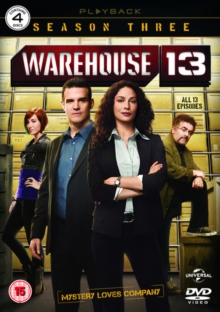 All 13 episodes from the third season of the American sci-fi mystery series.

When two secret service agents, Pete Lattimer (Eddie McClintock) and Myka Bering (Joanne Kelly), are reassigned to a top-secret government facility they initially perceive it as a demotion.

However, as they become familiar with the contents of Warehouse 13 - storehouse to a wealth of mysterious items linked to the supernatural and occult - the duo reconsider.

With the aid of Claudia Donovan (Allison Scagliotti), a technical whiz-kid, they apply themselves to the important task of investigating potential discoveries of new objects and seeking out those that have gone missing.