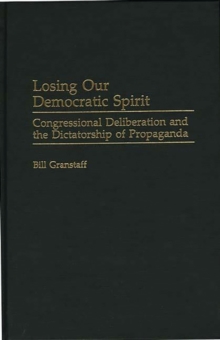 Losing Our Democratic Spirit : Congressional Deliberation and the Dictatorship of Propaganda Hardback

He begins by showing why full-representative-deliberation, or deliberation in which all representatives can participate, is one of three congressional institutions necessary to the maintainance of the country's democratic integrity.

He then looks at the framers' writings, the practices of the first Congresses, and democratic theory to suggest a deliberative theory for the American constitutional system.

Next, he reviews, criticizes, and supplements the literature on congressional deliberation from the theoretic perspective established earlier.

After detailing his methodology, Granstaff applies it to three case studies: the use of American troops in Lebanon, the Persian Gulf, and Somalia.

The findings in each case study are consistent with the hypothesis that the discourses-as deliberation-are phony.

He then discusses the implications within the three case studies and for the American constitutional system as a whole.

Ultimately, the book shows that when true deliberation is replaced by partisan posturing, various constituencies effectively lose their legitimate voice in national affairs.

Granstaff concludes with a procedural suggestion that might alleviate this problem.

This work is a timely critique for researchers and students of political communication, Congress, and democratic theory.