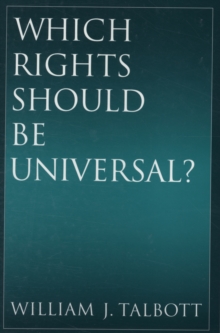 Which Rights Should Be Universal? Paperback / softback

We hold these truths to be self-evident... So begins the U.S. Declaration of Independence. What follows those words is a ringing endorsement of universal rights, but it is far from self-evident.

Why did the authors claim that it was? William Talbott suggests that they were trapped by a presupposition of Enlightenment philosophy: That there was only one way to rationally justify universal truths, by proving them from self-evident premises. With the benefit of hindsight, it is clear that the authors of the U.S.

Declaration had no infallible source of moral truth.

For example, many of the authors of the Declaration of Independence endorsed slavery.

The wrongness of slavery was not self-evident; it was a moral discovery. In this book, William Talbott builds on the work of John Rawls, Jurgen Habermas, J.S.

Mill, Amartya Sen, and Henry Shue to explain how, over the course of history, human beings have learned how to adopt a distinctively moral point of view from which it is possible to make universal, though not infallible, judgments of right and wrong.

He explains how this distinctively moral point of view has led to the discovery of the moral importance of nine basic rights. Undoubtedly, the most controversial issue raised by the claim of universal rights is the issue of moral relativism.

How can the advocate of universal rights avoid being a moral imperialist? In this book, Talbott shows how to defend basic individual rights from a universal moral point of view that is neither imperialistic nor relativistic.

Talbott avoids moral imperialism by insisting that all of us, himself included, have moral blindspots and that we usually depend on others to help us toidentify those blindspots. Talbott's book speaks to not only debates on human rights but to broader issues of moral and cultural relativism, and will interest a broad range of readers.