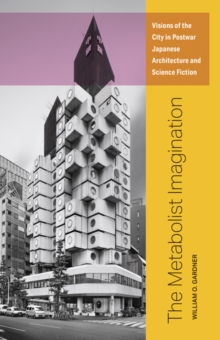 The Metabolist Imagination : Visions of the City in Postwar Japanese Architecture and Science Fiction Paperback / softback

Japan's postwar urban imagination through the Metabolism architecture movement and visionary science fiction authors The devastation of the Second World War gave rise to imaginations both utopian and apocalyptic.

In Japan, a fascinating confluence of architects and science fiction writers took advantage of this space to begin remaking urban design.

In The Metabolist Imagination, William O. Gardner explores the unique Metabolism movement, which allied with science fiction authors to foresee the global cities that would emerge in the postwar era. This first comparative study of postwar Japanese architecture and science fiction builds on the resurgence of interest in Metabolist architecture while establishing new directions for exploration.

Gardner focuses on how these innovators created unique versions of shared concepts-including futurity, megastructures, capsules, and cybercities-making lasting contributions that resonate with contemporary conversations around cyberpunk, climate change, anime, and more. The Metabolist Imagination features original documentation of collaborations between giants of postwar Japanese art and architecture, such as the landmark 1970 Osaka Expo.

It also provides the most sustained English-language discussion to date of the work of Komatsu Sakyo, considered one of the "big three" authors of postwar Japanese science fiction.

These studies are underscored by Gardner's insightful approach-treating architecture as a form of speculative fiction while positioning science fiction as an intervention into urban design-making it a necessary read for today's visionaries.