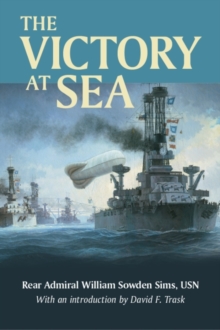 The Victory at Sea Paperback / softback

In 1921 Rear Admiral William Sowden Sims won the Pulitzer prize in history for Victory at Sea.

The commander of U.S. naval forces operating in European waters during the WWI, Sims offers an authoritative account of the U.S.

Navy's role in the war. Rear Admiral Sims explains the significance of submarine warfare, and its role in the defeat of Germany.

The U.S. Navy's campaign was shrouded in secrecy at the time.

Admiral Sims, head of the Naval War College when WWI broke out, was a brilliant gunnery reformer and noted Anglophile whose service in London ideally suited him to compose this history of the naval campaigns of the Great War.

He was placed in charge of American naval forces in Europe for the duration of the war.

After being rebuffed by his superiors when he made suggestions for improvement in gunnery practice, he is reported to have gone over their heads and claimed directly to President Theodore Roosevelt that American gunnery was hopelessly inaccurate.

Roosevelt called him back to become inspector of naval target practice.