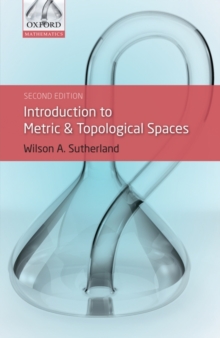 by Wilson A. (Emeritus Fellow of New College, Oxford) Sutherland

One of the ways in which topology has influenced other branches of mathematics in the past few decades is by putting the study of continuity and convergence into a general setting. This new edition of Wilson Sutherland's classic text introduces metric and topological spaces by describing some of that influence. The aim is to move gradually from familiar real analysis to abstract topological spaces, using metric spaces as a bridge between the two.

The language ofmetric and topological spaces is established with continuity as the motivating concept.

Several concepts are introduced, first in metric spaces and then repeated for topological spaces, to help convey familiarity. The discussion develops to cover connectedness, compactness and completeness, a triowidely used in the rest of mathematics. Topology also has a more geometric aspect which is familiar in popular expositions of the subject as `rubber-sheet geometry', with pictures of Moebius bands, doughnuts, Klein bottles and the like; this geometric aspect is illustrated by describing some standard surfaces, and it is shown how all this fits into the same story as the more analytic developments. The book is primarily aimed at second- or third-year mathematics students.

There are numerous exercises, many of the more challenging ones accompanied by hints, as well as a companion website, with further explanations and examples as well as material supplementary to that in the book.