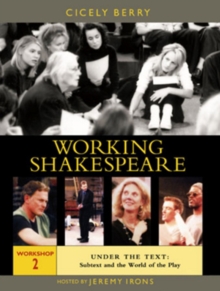 Part Two of a five-part educational acting series. The programme follows some of the best-known actors in Hollywood as they test their Shakespearean mettle, joining with their British counterparts at a master class in New York City conducted by the Royal Shakespeare Company.

The three-day master class is conducted by the RSC's Voice Director Cicely Berry and Head of Voice Andrew Wade.