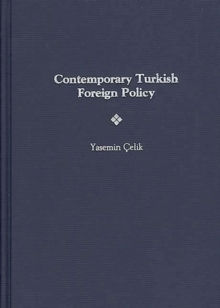 Celik examines how the easing of the East-West tensions, the end of the Cold War, and the disintegration of the Soviet Union affects Turkey's foreign policy.

As such, changes in the structure of the international system were bound to alter the ways in which Turkey interacted with other states in the post-Cold War world. An examination of Turkish foreign policy, however, shows a high degree of continuity and stability.

While Turkey's security environment has improved significantly during the 1990s, political and military considerations continue to drive Ankara's behavior.

Furthermore, despite shifts in foreign policy behavior-such as closer relations with the former Soviet republics, active involvement in the Persian Gulf War, and military alliance with Israel-there have been no major alterations in foreign policy orientation.

Turkey remains staunchly pro-western and the United States continues to be its most important ally.

The post-Cold War era, however, also has brought an element of uncertainty to Turkish foreign policy and raises questions about its direction for the future.