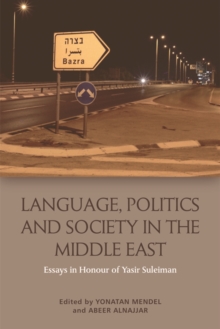 Language, Politics and Society in the Middle East : Essays in Honour of Yasir Suleiman Hardback

Presenting a range of case studies relating to the role of language in the Middle East, each shows that the study of language unearths deeper processes relating to political affiliations, social behaviour and transnational as well as religious and sectarian identities.

It also explores questions related to the power of language as a socio-political instrument, and addresses current issues that facilitate an understanding of the evolving intersections in the areas of language and politics in the modern Middle East.

This includes how language forms and is shaped by its social and political surroundings, the language manifestations of social, religious and political identifications, as well as groupings, divisions and polarisations in the encounter between language, conflict and politics in contemporary Middle Eastern communities.

Looking at language as a proxy for social and political struggles, the volume gives prominence to the long-lasting legacy and great contribution of Professor Yasir Suleiman to the field.Key FeaturesBrings together scholars from the fields of sociology, political science, Middle Eastern history, linguistics, socio-linguistics, political communication and media studiesIncludes chapters on identity changes via literary creations and word choice, code-switching and its importance in understanding political realities; Arabic studies in Jewish schools in Israel; the influence of the dominant Hebrew on Arabic spoken by Palestinians in Israel, and 'the language of the revolution' with case studies from Tunisia, Egypt and LibyaContributorsAshraf Abdelhay, Clare Hall College, CambridgeMariam Aboelezz, Lancaster UniversityMuhammad Amara, Beit Berl Academic CollegeReem Bassiouney, The American University of CairoMaisalon Dallashi, Tel Aviv UniversityEirlys E.