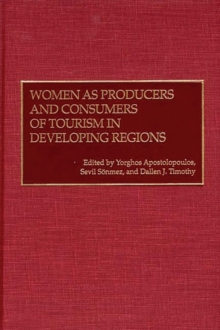 Women as Producers and Consumers of Tourism in Developing Regions Hardback

Tourism has become the world's largest industry, according to the World Tourism Organization; no surprise when one considers that it incorporates the world's oldest profession.

In some developing regions, such as the Caribbean or the South Pacific, tourism is the primary sector in which significant economic growth takes place.

In other regions, including areas of Latin America, Africa, the Middle East, and formerly communist eastern Europe, tourism is just beginning to take off.

In all of these areas, tourism's impact has been decidedly mixed.

Nowhere is this more visible than in the context of women's roles in tourism.

The contributors demonstrate the many ways in which gender determines the roles they play as both tourists and providers of tourism as product and service.

A valuable contribution to tourism studies, women's studies, and the literature of economic development. The premises of this unique collection of research are that women's roles in tourism are gendered, just as are their other roles in gendered societies; that tourism affects women differently than it affects men; and that women themselves are affected in different ways by tourism depending on such factors as race, region, and class (leisured consumer vs. working producer, or guest vs. host). The contributors cover theoretical perspectives, including those provided by feminists and economic development analysts; women's roles in tourism in the mature industries of the Caribbean, Southeast Asia, and the South Pacific; women's roles in the less-developed tourist destinations of the Middle East, Latin America, Africa, and eastern Europe; and implications for the future of economic development policy and of gender relations in tourism.