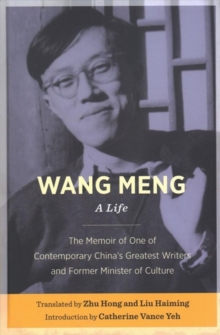 "Wang Meng is the only Chinese writer who really understands China," according to noted sinologist Merle Goldman, as well as being the writer that many at home and abroad have considered as deserving of a Nobel Prize if any Chinese writer ever did.

His memoir is a colorful record of life in an eventful era when one could get up in the morning a CCP official and go to bed an "enemy" of the people. Wang Meng knew the hardships of life from an early age.

A brilliant student since childhood, Wang gave up the chance of college to join the Communist underground.

Ultimately installed as a regular Communist Party cadre in charge of a district Party Youth League and bored with petty bureaucracy, Wang published a short story which rhapsodized the soul-searching of an earnest young "newcomer" on the scene-an instant bestseller.

In spite of Chairman Mao's favorable comments on the story, Wang Meng became a "rightist"-i.e., categorized as the enemy. Banished to distant Xinjiang, Wang Meng mastered the Uighur language, learned farming skills, and was embraced by the Uighurs as one of their own.

The attack on his short story "Hard Porridge," a masterpiece of irony (first English translation published in the Paris Review), only served to highlight his genius and started off a serio-comic string of writings on "porridge" from every conceivable angle by a host Chinese writers, becoming the memorable event of the year. Wang Meng did not change his spots when he became Minister of Culture and a member of the Chinese People's Consutative Conference.

While making contributions to cultural exchanges on the international scene, Wang Meng kept his identity as first and foremost a writer.