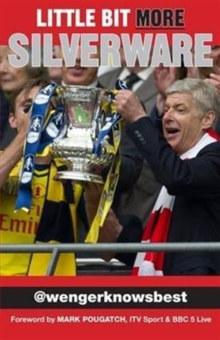 Little Bit More Silverware is the much-anticipated follow-up to last year's masterful @wengerknowsbest Twitter parody of the Arsenal manager's season.This comedy sequel is a top top hard-back souvenir of Arsenal's 2014-15 FA Cup-winning campaign, where the Gunners retained the famous trophy.@wengerknowsbest's 125,000-plus Twitter followers have become captivated by its tongue-in-cheek comic interpretations of the Arsenal boss, which capture his character and mannerisms with an uncanny irreverence.Whether you support the Gunners or not, there's so much to enjoy in this hard-back book, but just bear in mind...you will never see the real Arsene Wenger in the same light again!"Is this book a top top souvenir, reliving Arsenal's outstanding FA Cup-retaining season 2014-15, from the super award-winning Arsene Wenger Twitter parody artist @wenger- knowsbest?

Is it the follow-up to his debut book Little Bit Silverware that they have all been waiting for?