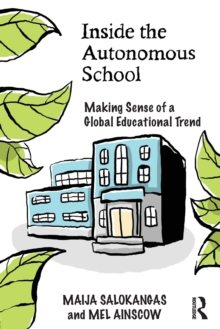 Inside the Autonomous School : Making Sense of a Global Educational Trend Paperback / softback

Over recent years, education systems across the globe have experimented with the concept of the autonomous school.

This takes a variety of forms and the schools involved have different titles, such as charter schools in the USA, academies in England, free schools in Sweden and independent public schools in Australia.

As this radical trend in policy gains momentum, Inside the Autonomous School considers whether the model is achieving its desired aims.

Drawing on evidence from an in-depth, longitudinal study of an academy located in an urban district in England, this book traces the various developments which took place in the school on its journey from `failing', to achieving an inspection rating of `outstanding'. The authors present a rich, first-hand account of the impacts that various policies and practices have had on the autonomous school and at the same time, situate their accounts and analyses within a wider national and international context.

This leads them to consider what can be done to ensure that school autonomy consistently promotes excellence and equity within education systems. A fascinating read and invaluable resource for practitioners, researchers and policy makers in the field of education, Inside the Autonomous School sheds much needed light on an increasingly established policy which is set to have far-reaching effects.